Clock tree consume more than 50 % of dynamic power. The components of this power are:

It is good design idea to turn off the clock when it is not needed. Automatic clock gating is supported by modern EDA tools. They identify the circuits where clock gating can be inserted.

There are two types of clock gating styles available. They are:

The latch-free clock gating style uses a simple AND or OR gate (depending on the edge on which flip-flops are triggered). Here if enable signal goes inactive in between the clock pulse or if it multiple times then gated clock output either can terminate prematurely or generate multiple clock pulses. This restriction makes the latch-free clock gating style inappropriate for our single-clock flip-flop based design 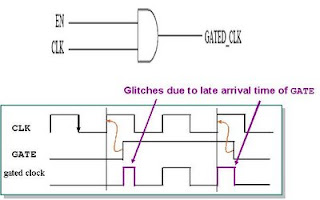 Specific clock cells are required in library to be utilized by the synthesis tools. Availability of clock gating cells and automatic insertion by the EDA tools makes it simpler method of low power technique. Advantage of this method is that clock gating does not require modifications to RTL description.